There’s a rare thing that happens sometimes in great comedies. The writers insert an episode, a scene, or even a few lines of dialogue that create a dramatic, emotional impact. A little island of seriousness among the jokes.

When this is done correctly, the knife twist from lighthearted laughs to pathos can be every bit as impactful as a similar scene within a drama, where the entire show may have been building up to it.

Fans of Futurama will know what I mean if I mention Fry’s dog, Seymour. Fans of Scrubs will remember Ben Sullivan. And fans of Adventure Time might just get a little choked up when they hear “Everything Stays.”

I’ve been a fan of Mike Birbiglia for a while, and I think it’s mostly because he lives on that edge between humor and pathos. He considers himself a stand-up comedian, but his on- and off-Broadway shows often feel like half dramatic one-man-show, half stand-up special. They revolve around events as serious as sleep-walking through a second-story window or being T-boned in a hit-and-run car accident.

“Working it Out” is Birbiglia’s podcast. As you might expect from a comedian’s podcast, there are plenty of popular comedian guests, from John Mulaney and Hannah Gadsby to Jimmy Kimmel and Frank Oz. But rather than being a simple excuse to joke with friends and acquaintances, Mike makes it something halfway between an interview show and a critique circle. It turns out he is deeply studious when it comes to the craft of telling jokes, and the craft of storytelling.

The through-line of the 40 episodes that have been released so far is the new show that Birbiglia is developing. It started with the title “The YMCA Pool,” but he now calls it “The Old Man and the Pool.” It’s a comedy show about getting older and coming to grips with your own mortality.

In the first episode, Mike tries out some of the material he’s working on with his friend and “This American Life” luminary, Ira Glass. Ira gives him advice that involves significant rewriting, and he accepts it graciously. By episode 25, when Ira returns, Mike has done his rewrite. They run through it again, and discuss it in depth. Mike jokingly asks, after half a year of revisions, how close his story is to being worthy of “This American Life.” And Ira deadpans, “halfway there.”

The Vulnerability of Revision

What makes Birbiglia’s comedy work so well, and the knife-twist that makes it hit so hard, is his vulnerability on stage. The podcast is different from a stage show, of course, but it still works because he’s willing to be vulnerable in front of an audience.

It’s clear that Mike doesn’t shy away from the hard work of revision. Guests bring their work in progress, and he brings his, and they hash it out, every episode. Some of the guests are clearly less into the workshopping aspect than others, but Birbiglia’s enthusiasm shows through.

If you’ve read any of my writing development journals, you can probably see why this appeals to me. There’s something raw and awkward about a rough draft. It’s hard enough to be confident about work that’s polished to a mirror shine, and it can outright hurt to reveal the grotesque early versions of the art we’re passionately trying to create, in the midst of its creation. But it’s immensely reassuring to be reminded that it’s like that for everyone! Art doesn’t spring fully formed from our minds, like Athena from the head of Zeus. It has to be shaped and reshaped. Bits added on, and bits sanded off. The slow, steady grind of progress.

Of course, it helps to have a few jokes to lighten the mood, even if they are jokes about death. 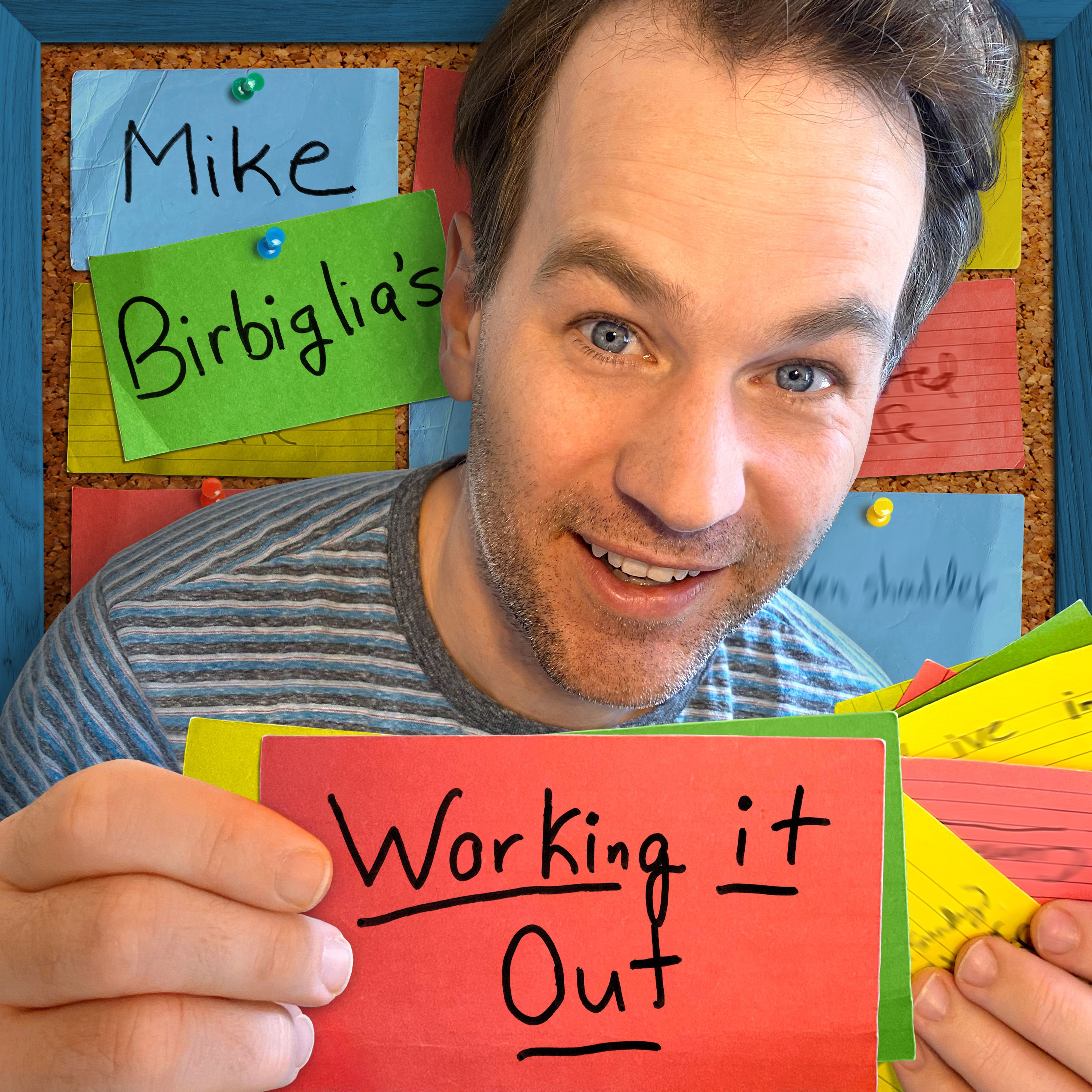 Sterlin Harjo: Comedy From Tragedy and Reservation Dogs – Mike Birbiglia's Working It Out

(Recorded September 2021) Filmmaker Sterlin Harjo co-created the smash comedy hit Reservation Dogs for FX about four Indigenous teenagers growing up on a reservation in Oklahoma. Sterlin tells Mike about the time he accidentally taped over someone's wedding video while applying to the Sundance Film Lab. He also discusses Native representation in film & how Reservation Dogs may represent some sense of hope. Many laughs. Many challenging topics. A little backstrap.